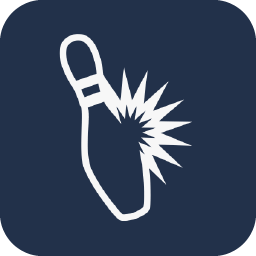 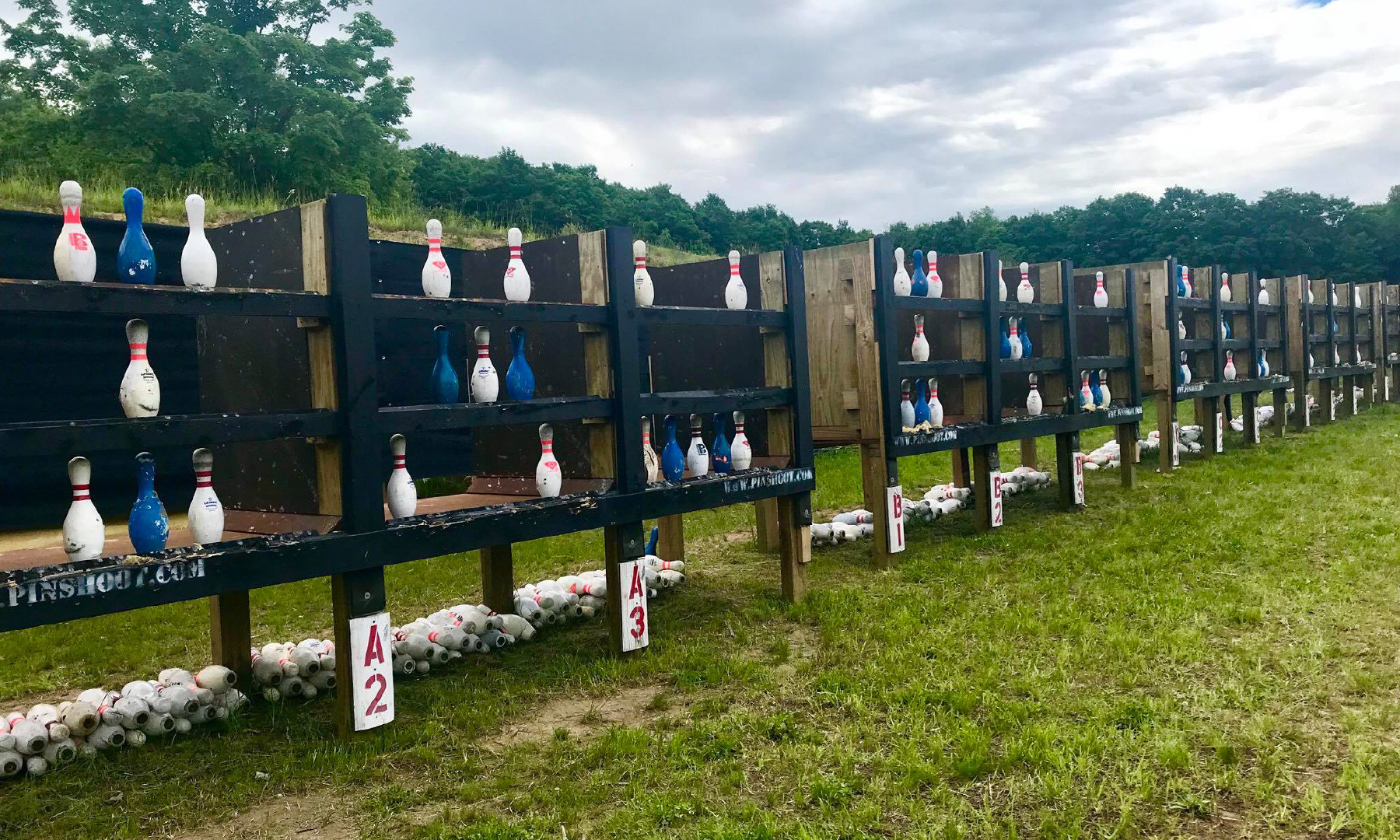 Hitting a pin with enough power will clear it off the table.

The nature of bowling pin shooting means there are no scoring rings, no chronograph, and the pins are self-regulating as far as power is concerned. Hitting a pin with enough power will clear it off the table.

The question is: how much is “Enough?”

Bowling pins weigh three and a half pounds, give or take a few ounces. They are covered in a hard plastic skin. A bullet without enough power will simply tip a pin over, or skid it back but not off of the table. The two scoring methods used in pin shooting call for different power levels. To clear a pin off of the table is one, to tip it over the other.

The standard method of measuring handgun power is the Power Factor. Here, the weight of the bullet in grains is multiplied by the velocity in feet per second. This produces a six-figure numeral. A .45 ACP, with a bullet of 230 grains, going 800 feet per second, generates a Power Factor (PF) of 184,000. For convenience, we both round down and also drop the last three digits, so that load produces a 184 PF.

Here’s the important part: decades of experience has shown us that a 195 PF is the threshold of consistent bowling pin performance. That’s what it takes to push a pin off the back of a table with assurance.

This is complicated by the design of pins. They are round objects, and as your bullet impact moves off of the centerline, the surface it strikes is angled. An edge hit, even with a 195 PF load, is not always going to take the pin off of the table. It may (and many have) just spin around, and then fall over and stay on the table.

That is why so many pin shooters use hollow point bullets, or semi-wadcutters with a large flat, or meplat, on the bullet nose. The hollow point or meplat allows the bullet to “dig” in a bit, and could save a shot from being a bad hit, and make it just a slow roll.

The list of cartridges that can easily and consistently produce a 195 PF is not large, but it is large enough. At the bottom end we have the .357 Magnum. Moving up in revolvers, we have the 10mm (yes, they make revolvers in it) .41 magnum, .44 Special, .44 Magnum and .45 Colt.

Fans of the .40 always object to this, and sometimes loudly. Each year after it was introduced, we had shooters show up at The Pin Shoot with “hot 40 loads” that they assured us would “Clear the tables.” This rarely happened. Why? Numbers.

The common 40 S&W bullet weighs 180 grains. To produce a 195 PF (the threshold) that bullet has to be going 1,084 fps. No factory load produced goes that fast. To make that figure, you have to handload, and you have to be using a full-sized .40 pistol, one with a five-inch barrel. A comped Pin Gun, with a 5.5” barrel, gives you more speed. But if you come up short in velocity, you will be disappointed.

The 195 PF threshold is just that, the starting point. Many experienced pin shooters use hotter loads, with PFs of 200, 205 or 210. Some do more, but if you go much past 210 you begin to run into the law of diminishing returns. Yes, the load is more effective at pushing pins off the tables, but you are slower shooting it, taking time to recover from recoil. A 40 with a 180 grain bullet, to make a 200 PF, has to be going 1,112 fps. If you are going to be doing that, let us know so we can be someplace else.

The “sweet spot” on a bowling pin is just about the size of a playing card. A hit there, even with a barely-sub-195PF load, will push the pin off of the table. But, the clock’s ticking, and a slow-rolling pin can cost you half a second, a full second, or more.

If you take a quick look at the Power Factor threshold chart, you will see that revolver shooters catch a break. Let’s compare a shooter with a .45 ACP, using 200 grain JHPs, against a wheelgun in .45 Colt, with 255 grain flat-nosed bullets. The .45 ACP has to churn up 975 fps, compared to the revolver shooter and his sedate 765 fps. The revolver shooter has another advantage, in that he/she can be using a full wadcutter, hard-cast bullet. That one will “bite” into a pin on an off-center hit, better than the .45 ACP JHP.

The pistol shooter will have to find .45 ACP+P ammo, or load his own. The revolver shooter has a plethora of factory ammo that will more than do the job. At the other end of wheelguns, the shooter with a .357 Magnum has his work cut out for him.

The need for power, and the volume of shooting to be done, almost requires reloading as a hobby, but careful handgun and caliber selection can mitigate that.

Oh, and the tip-over events? Any factory 9mm load, no matter how wimpy, will do the job. In fact, a lot of shooters who compete in the tip-over Optionals don’t even reload 9mm. they simply buy the least-expensive bulk-pack 9mm, when it is on sale, and they are good to go. The numbers? Let’s say you enter the 9×12. That means twelve shots per run, 36 per three-table set. A box of fifty gives you 14 extra shots per three-table set to clean up, or get warmed up, or finish that last, stubborn pin.

A bulk purchase of 1,000 rounds of 115 grain FMJ (no need for JHPs when you just need to tip them over) is good for 20 sets, or 60 tables of 9×12. Nobody shoots 60 tables, not even the dedicated, obsessive pin shooter. Buy cheap 9mm and don’t worry about PF there.

How does my ammo stack up?

First, don’t believe press statistics. Yes, the ammo maker will tell you the bullet in question is going “X” fps, but out of your pistol, does it really? You must chronograph your ammunition to be sure. It must be absolutely reliable. There are no “alibis” or re-shots in pin shooting. Once you lift your gun off the rail, your run counts, is timed, and will be recorded.

At twenty-five feet, all handguns are more than accurate enough to keep all their shots well inside the borders of the playing card sweet spot.